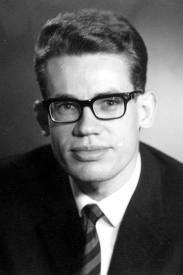 Per Brinch Hansen was born 13 November 1938, in Copenhagen, Denmark. He is a pioneer in the development of operating system principles and parallel programming languages.

Significant work Written over a period of more than 30 years, Brinch Hansen’s technical papers and textbooks describe a relentless search for simplicity exemplified by the RC 4000 mul- tiprogramming system; the Solo operating system; the monitor notation for modular parallel programming; the parallel programming languages Concurrent Pascal, Edison, Joyce, and SuperPascal; and his scientific programs for parallel architectures. Throughout his career, Brinch Hansen attempted to recognize the essence of complex software problems and express them in terms of a small number of abstract concepts. The technical ideas he rec- ognized are now standard material in textbooks on oper- ating systems and parallel programming. His scientific work can be divided into three phases: operating system principles (1966–1972), parallel programming languages (1972–1988), and computational science (1988–1998). In recent years, he has devoted increasing energy toward documenting the historical origins of modern operating systems and concurrent programming concepts. Brinch Hansen studied electrical engineering at the Technical University of Denmark. After graduating in 1963 he joined the Danish computer company Regnecentralen. There he was a member of a Cobol compiler group headed by Peter Naur and Jorn Jensen. He discovered that writing is a rigorous test of simplicity: “It is just not possible to write convincingly about ideas that cannot be understood.” At Regnecentralen he was responsible for the architecture and software of the RC 4000 minicomputer. The RC 4000 real-time control system was his first experience with multiprogramming and semaphores (1967). The project succeeded because they used the simplest possible techniques to solve an unfamiliar problem of modest size. The RC 4000 multiprogramming system introduced the novel idea of a system kernel for parallel processes and message communication that can be extended with a variety of operating systems.2 Brinch Hansen left the computer industry in 1970 and became a university researcher in the US. The implementation techniques of operating systems were reasonably well understood in the late sixties. But most systems were too large and poorly described to be studied in detail. While Edsger Dijkstra had clarified fundamental aspects of process synchronization, most of the literature on operating systems emphasized implementation details of particular systems rather than general concepts. The terminology was unsystematic and incomplete. At the time there really were no suitable textbooks on operating systems. Universities were therefore unable to teach core courses on the subject. In 1970 Alan Perlis invited Brinch Hansen to spend a year at Carnegie Mellon University where he wrote the first comprehensive textbook on the principles of operating systems, Operating System Principles. Of the process of understanding operating systems he said:

"While writing the book I reached the conclusion that operating systems are not radically different from other programs. They are just large programs based on the principles of a more fundamental subject: parallel programming. Starting from a concise definition of the purpose of an operating system, I divided the subject into five major areas. First, I presented the principles of parallel programming as the essence of operating systems. Then I described processor management, memory management, scheduling algorithms, and resource protection as techniques for implementing parallel processes. I defined operating system concepts by algorithms written in Pascal extended with an (unimplemented) notation for structured multiprogramming."

The book includes a concise vocabulary of operating system terminology, which is used consistently throughout the text.

The combined work of Dijkstra, Tony Hoare, and Brinch Hansen on programming notation for operating system concepts led to the initial development of parallel programming languages. It began in 1971 with Hoare’s notation for a conditional critical region that delays one or more processes until a Boolean expression is true.

Unfortunately, this elegant idea is inefficient because it requires periodic reevaluation of the expression as long as it is false. One of Brinch Hansen’s first papers on programming language concepts proposed an (equally inefficient) variant of conditional critical regions for priority scheduling. A more original idea was his introduction of scheduling queues, which eliminated superfluous evaluation (but complicated the programming somewhat). Dijkstra, Hoare, and Brinch Hansen suggested another parallel programming concept in 1971: the monitor, which combines synchronization procedures with the shared variables upon which they operate. Brinch Hansen’s oper- ating system book introduced a programming notation for monitors (shared classes), based on the class concept of Simula 67. Somewhat later, Hoare published a similar notation for monitors. His proposal included a variant of Brinch Hansen’s scheduling queues (“conditions”). By the fall of 1972 Brinch Hansen was already committed to the goal of developing a parallel programming language with a modu- lar (“object-oriented”) notation for processes and monitors. At the California Institute of Technology he defined the programming lan- guage Concurrent Pascal, which supports monitors and parallel processes for implementation of modular operating systems. Because syn- chronization errors can be extremely difficult to locate by program testing, Concurrent Pascal was designed to permit the detection of such errors during compilation. With the help of a couple of students, a portable implementation of the language was running on a PDP-11 mini- computer at the end of 1974. Concurrent Pascal had obvious limitations by today’s standards. But, in 1975, it laid the foundation for the development of programming languages with abstract concepts for parallelism. Brinch Hansen used Concurrent Pascal to program the portable operating system Solo as a realistic test of the new programming language. The most significant contribution of Solo was undoubtedly that the program text was short enough to be published in its entirety in a computer journal.5 The portable implementation of Concurrent Pascal and Solo was highly successful in spreading the software to almost 200 installations worldwide. The time was now ripe for a book about the principles of abstract parallel programming, and so he produced The Architecture of Concurrent Programs6 while at the University of Southern California. The book includes the complete text of three model oper- ating systems written in Concurrent Pascal. Technology was now moving from multiprocessors with shared memory toward multi- computers with distributed memory. For microcomputer networks, Brinch Hansen proposed a combination of processes and monitors called distributed processes, which communicate by means of synchronized “remote procedure calls.” After Concurrent Pascal, Brinch Hansen designed the parallel programming languages, Edison and Joyce, to experiment with Hoare’s concepts of conditional critical regions and synchronous message communication, respectively. At the end of the preface to his collection of classic papers, Brinch Hansen said of his activities:

"In the 1990s the programming problems of operating systems have surfaced again in parallel scientific computing: there is a serious need for machine-independent programming languages and algorithms. To understand this challenge I spent five years writing portable multicomputer algorithms for typical problems in science and engineering. My book, Studies in Computational Science,10 describes this work."

In 2002, the IEEE Computer Society awarded Brinch Hansen its IEEE Computer Pioneer Award for his accomplishments in operating systems and concurrent programming. Fittingly, this recognition came after several years of work on his part to document historical developments in these areas, and to celebrate and illuminate the accomplishments of his fellow pioneers. His efforts in this area have already produced two edited volumes, one focused on classic operating systems11 and the other on the major breakthroughs in concurrent programming.12 Brinch Hansen recently joined the editorial board of the IEEE Annals of the History of Computing, where we hope to benefit from his expertise and enthusiasm.

Quotations “Writing is a rigorous test of simplicity: It is just not possible to write convincingly about ideas that cannot be understood.” “Programming is the art of writing essays in crystal clear prose and making them executable.” “Although the practical demands of software design make simplicity essential, a more profound reason is to be found in the nature of creative work. The joy of discovery and the pleasure of making something work are the most powerful drives in science and engineer- ing. To sustain this motivation, a software engineer must look for astonishing simplicities and beautiful patterns of design.”

Background of Per Brinch Hansen