One summer afternoon in 1963, the President of the University of Warsaw, Professor Dr. Stanislaw Turski, with whom I had just passed one of my last exams at the Department of Mathematics, invited me to his office. I met there Dr. Andrzej Kielbasinski, the only one »computer-man« (numerical analyst, of course) we had at our Department in those days.

»Gentlemen«, seid Rector Magnificus, »could you, please, tell me what type of association you have in mind when I say 'Denmark'?«.

We tried not to show how surprised we were with the question.

»Niels Bohr«, seid Andrzej; his mind was undoubtedly much more scientifically directed than mine.

»Tivoli«, »Little mermaid«, »Thorvaldsen«, »bicycles«, »agriculture« - we started to outvie one another.

»Thank you, that is enough«, seid Professor Turski. »And now, what do you know about the production in Denmark?«

»My last question - do you know anything about the computer science in Denmark?«, asked Professor Turski.

Silence. After a while I shouted: »As far as I remember one of the authors of the new programming language Algol 60 is a Dane!«

»Yes, you are right«, said Professor Turski, »but let me give you some more information on this point. Dr. Peter Naur, the scientist you have just mentioned in relation to Algol 60, is working in a scientific company called Regnecentralen. This company has built a very nice medium-size computer, Gier, which - as far as I can judge - has good software and very likely could be quite useful at our University. Moreover, this is a company in which scientists employ salesmen and not vice versa. That is why I have made an agreement with the Director of Regnecentralen, Mr. Niels Ivar Bech, that Gier will be shown in Poland. First of all both of you will spend a few weeks in Copenhagen to learn as much as possible about this computer, then a special exhibition will take place in Warsaw, and then ... we shall see«.

This was the beginning of the »invasion« by Regnecentralen into Poland and later on into Czechoslovakia, Hungary, Bulgaria, Rumania, GDR and Yugoslavia, as well.

It is hard to believe but the BNF notation was so difficult to understand in those days! And then our first experience with Gier and Gier-Algol - I shall never forget my efforts to write a procedure »bisection« which would be either shorter or faster than the one written by Peter Naur (needless to say - unsuccessful efforts).

Besides our studies we had lots of meetings, discussions and also social contacts with many of the Regnecentral-people. This helped us not only to learn about computer science activities in Denmark but also to enlarge our knowledge about the country and the nation.

The atmosphere in Regnecentralen was very nice, the people extremely friendly, ready to help, and competent. I think this was one of the reasons, besides the technological and scientific results, why Regnecentralen could successfully compete on our market with some much larger firms. This climate was certainly due to Niels Ivar Bech and the group of people he gathered around himself, including Oscar Lund as the Sales Manager and Peter Ambeck-Madsen from the Information Department. 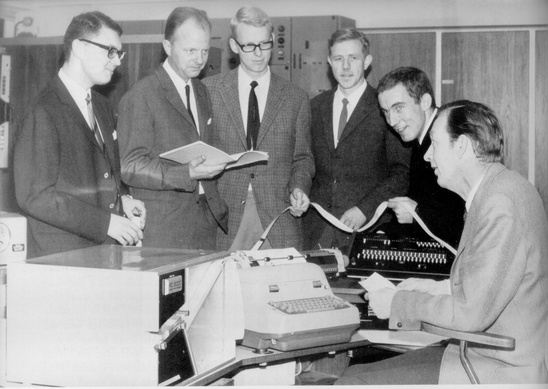 In November and December 1963 the exhibition of Gier took place in Warsaw. The computer was placed in the Palace of Culture and Science, in a very nice environment, and the Big Show started. We had lots of usual exhibition activities - Gier and its software were presented to general public. Many excursions from schools and different institutions, more or less interested in data processing, visited us. The demonstration programs like »20 questions«, »NIM«, »Music by computer« etc. were very popular, even during a special TV show. At the same time we also had many serious visitors from different parts of Poland and Eastern Europe who were interested in hardware, software and applications.

There was, however, another aspect of this exhibition. Due to the agreement between Niels Ivar Bech and Professor Turski, Gier was at our full disposal. During the whole exhibition period the computer was being used by scientists from the University of Warsaw, mainly by mathematicians, physicists, astronomers and economists. At the same time software and hardware specialists from Regnecentralen (including Christian Gram, Henning Isaksson, Peter Naur) were visiting Warsaw, giving lectures or courses and conducting seminars for research workers and students from our University and from other scientific centres. This presentation of different aspects of computer science was directly controlled by Niels Ivar Bech who during his numerous visits to Warsaw also investigated possibilities for a future scientific co-operation between our two institutions.

In January 1964 Gier was bought by Poland and the decision was taken to found the University Computation Centre under the authority of the President of the University of Warsaw. In those days we had not too many computere in Poland and our experience in running a computation centre was also rather limited. But the reliability of Gier and of Regnecentralen helped us quite a lot. Moreover, Oscar Lund settled an extremely efficient »recovery algorithm« in case of any hardware or software problem: »Today a call to Copenhagen, tomorrow the sparepart/document in Warsaw«. 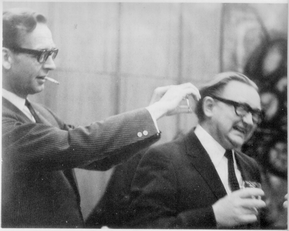 Gier is still being used at our University. During the period of 12 years it has been working in total about 81000 hours which gives in average some 18.5 hours per day (including Sundays and holidays). In this amount only 6.02% is uneffective. The number of people we have trained in Algol 60, Gier-Algol and Algol 5 during this time is more than 5400.

The very successful work of Gier at our Centre has helped in opening the door for Regnecentralen in Poland and in some other countries. And due to the agreement between the President of the University and the Director of Regnecentralen, our Centre participated in several scientific and educational actions taken by Regnecentralen in different places. For example, I was giving lectures, conducting seminars and giving consultations on programmmg languages and Regnecentralen's software during:

Regnecentralen used to keep us informed about its new software and hardware products and new trends. When the prototype of the RC4000 computer was installed at the chemical plant in Pulawy, Poland, we became quite interested in this system. Knowing this, Niels Ivar Bech tried to start larger scientific co-operation on the RC4000 software. Concrete and interesting projects were already discussed during the big RC4000 trip in the spring 1969 in Warzaw. Bech and a team of some ten people were having a two-days seminar on the RC4000 system. The same type of the presentation of RC4000 was organised by Regnecentralen also in other Eastern European countries. However, that was unfortunately one of the last Bech activities in Regnecentralen. As a result, the idea of the co-operation slowly died away, but our knowledge of the RC4000 system has not been wasted. We still use this knowledge in education and in our contacts with the chemical plants where the RC4000 computer was installed.

Today, in 1976, I could much better answer the questions put to me by Professor Turski thirteen years ego. The contacts with Niels Ivar Bech and his staff have left indelible memories. We have been charmed with the country and its nation. Danish scientific and technological achievements have won our great respect. Our friendships made in Denmark have not been weakened by the elapsing time.