Bech in the International Computer Milieu

With Niels Ivar Bech's death, Europe has lost one of its most creative leaders in the field of electronic digital computers. He was a glant among his peers as the originator of computer development under the auspices of the Danish Academy of Sciences, the first director of Regnecentralen, Denmark's and one of Europe's first independent designers and builders of electronic computers. He was an inspired builder of people, particularly his own countrymen, of both national and international organizations and a tower of strength and source of sound advice to all who were fortunate enough to know him.

I met Niels Ivar Bech during one of the organizational meetings for the First International Conference on Information Processing held at Unesco House in Paris in June of 1959. He was one of the original members of the General Assembly of the International Federation for Information Processing (IFIP) and he became one of my most trusted friends, advisor and counselor. During the summer of 1960 I visited the Danish Academy of Sciences immediately following my election as the first president of IFIP to present a lecture to Bech's associates on the state of the art of computer development. It was one of a dozen of such lectures that I had given to computer groups throughout Europe on that trip, but that visit was unique, different from all of the others. Bech's group was one of the most knowledgeable, creative, forward-thinking, and the most inspired of any group then developing computers in Europe. The air was charged with excitement as our nonstop discussions covered every facet of computer design, development, use, the education of staff, organization, the formation of national and international societies and enveloped us in an aura as we proceeded from breakfast to nightcap, lecture rooms to laboratories to Tivoli gardens to theater to dinner to the museum at Louisiana and to the halls of Elsinore Castle. My few days in Copenhagen with Bech and his associates are etched indelibly in my memory. Even now as I recall those precious hours with nostalgia I am filled with the excitement that charged all of us in those early days of computer development.

It was during the following years when Niels Bech served as the program chairman for IFIP Congress 62 held in Munich, Germany, that I became aware of the depth of Bech's human sensitivities and knowledge, and his indisputable integrity and total trustworthiness as a friend and advisor. He was of invaluable assistance during the most formative period of IFIP's gestation and continued to serve IFIP with boundless energy for over a decade.

He was an advisor to Unesco and deeply involved in the evolution of the International Computation Center in Rome. He was one of the founders and inspirations for the formation of IFIP's Special Interest Group on Administrative Data Processing (IAG). He was one of the first men in Europe to identify the need for computer education and training within the entire European business users community. As a result he spearheaded the many seminars given on the use of computers and their application to business.

One of Niels Ivar Bech's unique contributions was the extraordinary cadre of young, outstanding computer men that he developed within Denmark. It was his personal dynamism and visjon that sent his best people to spend a year studying in some of the centers of computer development throughout the world. These same men returned home to become the backbone of technical creativity and management of Regnecentralen and then the heads of the computer departments in many of the universities in Denmark. »Bech's boys« became the leading professors and educators in computer sciences throughout Denmark and are responsible for training many of the computer people in Denmark and portions of Germany.

Bech was a warm, understanding human being with whom I shared intellectual exchanges as well as good food, drink, and camaraderie, in cities all over the world, wherever our paths crossed. Our last dinner together was in Toronto, Canada, in 1970, during an IFIP Council Meeting. We sought out a Scandinavian restaurant where Bech was well known and enjoyed a dinner together which will be one of my treasured memories.

I have lost a valued friend, our profession has lost a dynamic contributor, and the computer industry has lost a highly creative entrepreneur, but the record of his accomplishments and the memories of his friends and colleagues are a legacy of great significance. 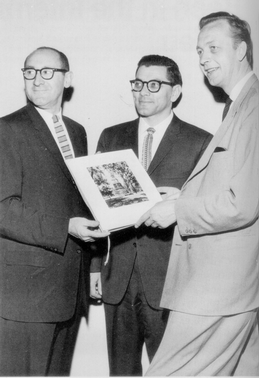